The cloud will have an enormous impact on job creation. It’s a disruptive technology that will transform the world as we know it. It will drive down IT costs, foster innovation and create millions of new employment opportunities around the world.

Yep, that’s pretty much what we were thinking last month, when we doubled the size of the AIS Network cloud. However, this week, new research from industry analyst firm IDC makes it official:

Spending on public and private IT cloud services will generate nearly 14 million jobs worldwide from 2011 to 2015.

And, IT innovation created by cloud computing could produce $1.1 trillion a year in new business revenues.

Researcher John Gantz, senior vice president at IDC, led the study and authored the white paper. Both were commissioned by Microsoft. Gantz is a remarkably knowledgeable and interesting colleague for whom I have great respect. Since I used to work alongside him on the Business Software Alliance’s worldwide piracy studies (from 2001-2006), I was eager to read his newest findings. Among them, there was a note on small businesses. Although small businesses make up the majority of employment in most parts of the world, they are generally less computerized. At the same time, IDC expects small- and medium-size businesses to adopt cloud services faster than large companies, many of which are constrained by existing legacy investments. “So when you put it all together, the two trends balance out, and you get a 50-50 split,” says Gantz.

The study also found that the number of new jobs produced by cloud computing will be somewhat proportional to the size of each industry, but not entirely. In some industries, such as professional services and retail, the high percentage of small- and medium-size businesses will drive up adoption. In other sectors, such as banking, security issues will slow the move to the public cloud, but may increase adoption of private IT cloud services. Overall, three industries expected to generate the most cloud-related jobs are:

The highest percentage of new jobs will occur in emerging markets, according to the study, especially China and India, which together are expected to produce nearly 6.8 million cloud-enabled jobs between 2011 and 2015. This can partly be attributed to the size of their workforces, and partly to the fact that many Chinese and Indian companies aren’t bound by large legacy system investments. “We tend to think of China and India as emerging markets, but they’re actually early adopters of the cloud,” Gantz says. “They’re not bound to existing systems. They’ve skipped that step, so there’s less holding them back.”

Nearly 1.2 million new cloud-related jobs will be created in the U.S. and Canada, according to the IDC study. An early adopter of cloud computing, the U.S. accounted for 62 percent of worldwide spending in public IT cloud services in 2011.

IDC developed its results by analyzing cloud spending trends in more than 40 countries and then using this information to forecast the number of jobs this spending will create.

The Cloud Improves Quality of Life

With these unprecedented opportunities also comes an improved “quality of life” for IT managers. The cloud is helping companies to be more innovative by freeing up IT managers to work on more mission-critical projects. To that point, here’s a good snippet from the Microsoft press release:

“We deployed Microsoft Office 365 and Windows Intune for one of our clients, and the comment we heard from the chief operations officer is that he can actually schedule a meeting with the IT director to talk about strategic applications,” says Carol Reid, sales director for Agile IT, a Microsoft Tier 3 Cloud Champion Member headquartered in San Diego, Calif. “Whereas before, the IT director was chasing fires and tending to pretty basic plumbing, he now has the bandwidth to pursue truly strategic projects that move the business forward.”

In addition, many businesses are using the cloud to improve how they work with customers and partners.

“One of the trends we’re seeing is that companies are using cloud-based collaboration software not just for their internal employees, but to engage and share information with partners and vendors,” says Aaron Nettles, co-founder and CEO of Vorsite, a Microsoft Tier 3 Cloud Champion Member based in Seattle, Wash. “So it’s really not just about maintaining technology but also about leveraging it to drive revenue for the business.”

To accommodate the growing interest in the cloud, Nettles plans to double the size of his workforce this year. “It seems like a threshold has been crossed where customers are no longer asking, ‘Is the cloud right?’ but ‘When can we get it deployed?’”

Among the enterprises making use of the cloud to boost innovation is Underwriters Laboratories (UL), a global company that provides safety testing and certification for a wide range of product categories. In recent years, the company has acquired several businesses to broaden the services it offers to customers. Because Office 365 frees the company from adding and maintaining new servers, UL has been able to complete its technology integrations very rapidly. Whether it’s a large acquisition in China or a small one in Australia, UL can now integrate new employees within a few weeks instead of several months.

“I didn’t have to staff up with a bunch of contractors or take project managers off other projects,” says Christian Anschuetz, the company’s chief information officer. “And that allowed us to take resources that would otherwise have been needed for our internal integration and focus them instead on growing the business to the benefit of customers. I can’t tell you how much that’s worth.”

Will the cloud be an important force in helping to restore worldwide economic health? Well, that remains to be seen. However, from our experience (and apparently that of Microsoft), the cloud is top of mind for CIOs in the U.S. and Canada and, in fact, around the world. They want to understand how they can use it to grow their companies, and they want to ensure they have the best people (and skills) in place to make it happen. We at AISN stand ready to help guide them through that educational process.

What’s your view on the new IDC study? Take a look at the chart below and leave your comments. 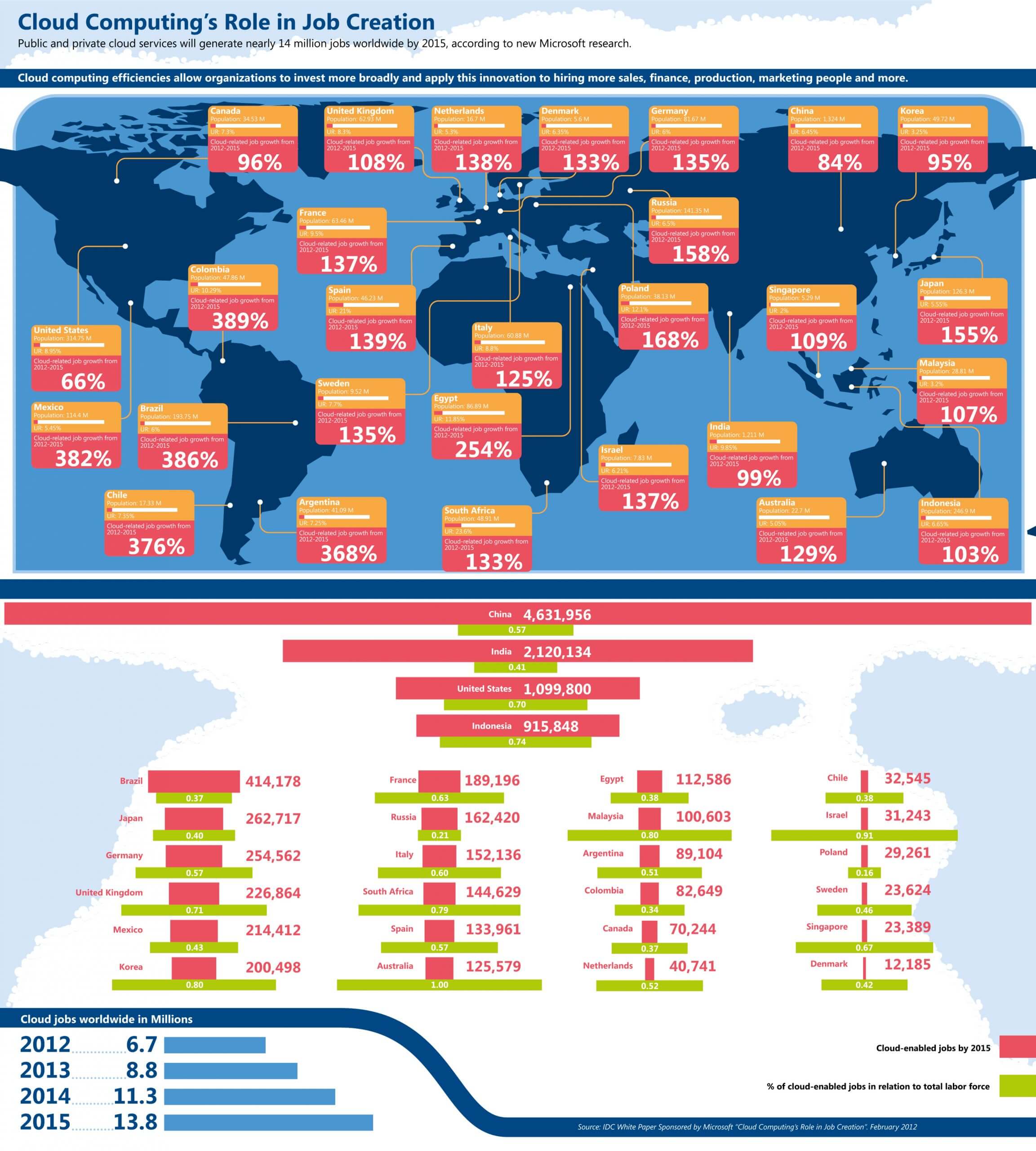