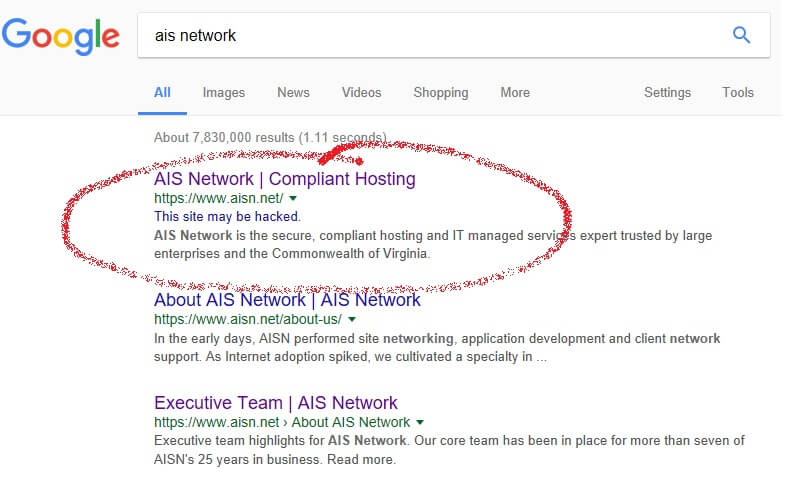 No. Our site was not hacked. Period.

Yesterday, a customer Googled us only to find this — under our name, a notation from Google, which indicated “This site may be hacked.”

Since our core strength is security and we are regularly audited by independent auditors to ensure our 24x7x365 security posture, this surprised us considerably. After all, our site does also take the extra step of using the https:// protocol identifier, which means that information is being transmitted via Secure HTTP (S-HTTP) or Secure Sockets Layer (SSL) protocols that encrypt information being passed between a client (browser) and a server (web site).

As I investigated further, this is what I found:

Google had identified as infected a very old blog post about SharePoint 2010 FIS. This early 2012 post had never given us any problems over the last five+ years. I inspected the text and the code in this post and could not find any spammy content. I ran a site security tool to check the page and came up with no malware or spam detected.

Then, I followed the instructions that Google recommends. I visited Google Search Console and asked it to fetch and render that page. That was at 1:25 p.m. PDT. The Google bot is supposed to recrawl and verify. My results said “Indexing requested.” At 4:30 p.m. PDT, with still no response from Google, the blog was put into the trash. Since it was Part 2 of a two-part blog, I also threw Part 1 in the trash.

We are working with Google to identify what was flagged and why, however, according to their initial response, it may take them weeks to get back to us. Lovely. I am thinking that they must be back-logged.

In the meantime, no other search engines of which I am aware indicate an issue with our site.

The bottom line is that we were falsely accused by Google of being hacked and must suffer the “hacked” label until such time as Google finds time to remove it.

We want our customers to know that at no time was there any threat to the AISN network infrastructure — nor was our web site hacked.